LinkedIn is introducing two new features: the ability to use QR codes for quickly sharing profiles and contact details, and a “See Translation” button that will translate posts into different languages. Currently available for iOS and Android, the QR codes offer users a quick option for accessing someone’s profile or sharing their own code via messaging apps, email, websites or printed materials such as business cards, conference badges and company brochures. The translation tool, available for more than 60 languages, is offered through LinkedIn’s desktop and mobile web versions (and soon via iOS and Android).

“In the LinkedIn app, tap the QR code icon in the Home tab’s search bar, and there you’ll see a QR scanner as well as your own code,” explains Engadget. “Scanning others’ codes or uploading an image of one from your phone will take you to that user’s profile.” 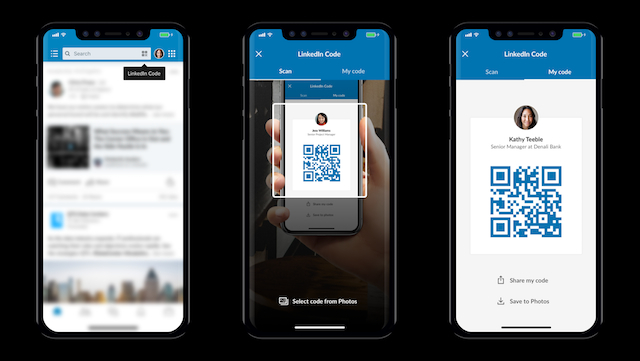 The “See Translation” button appears on posts in the LinkedIn Feed section. It is “powered by Microsoft Text Analytics API, which also provides translations for Bing, Skype, Office and Twitter,” notes Engadget.

Microsoft acquired LinkedIn in 2016, and has since “released a LinkedIn-powered Resume Assistant for Office 365 subscribers, incorporated LinkedIn details into Outlook.com and added a feature to its AI-powered Pix camera app that lets users find a person’s LinkedIn profile through a snapshot of their physical business card.”

According to TechCrunch, LinkedIn now has more than 560 million members.