At the Intel Developer Forum, the company showed several new technology projects, including Project Alloy, an unusual “mixed reality” headset; a quadcopter “ready-to-fly” drone aimed at software developers; and a new Joule maker board designed as a platform for computer vision products. The company, which plans to collaborate with Microsoft on the mixed reality headset, says it does not need to be connected to a high-powered personal computer, as do other headsets, most notably Oculus Rift.

The Wall Street Journal reports that Project Alloy “could be considered a variation on augmented reality,” via its front-facing 3D camera, dubbed RealSense, that lets the user see and control objects in the physical world via hand gestures and “eliminates the need to deploy sensors to prevent users from walking into walls.” 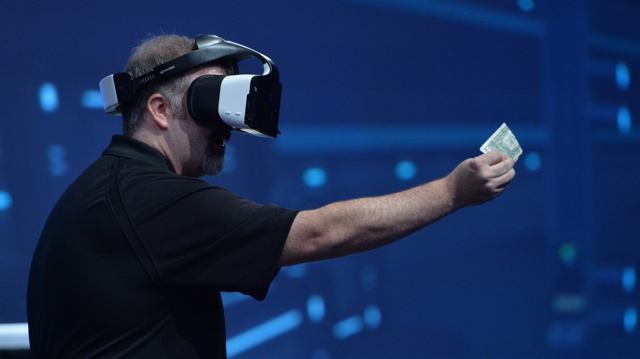 Intel chief executive Brian Krzanich notes that, “when sight and computing come together, it gives the device the ability to understand and respond to its environment.” No pricing was mentioned, but Intel plans to “share specifications of Project Alloy to allow other companies to make their own versions of the product in the second half of 2017.”

TechCrunch reports that Intel’s Aero Ready-to-Fly quadcopter is “a fully assembled unit that runs on Intel’s Aero Compute Board with a Linux operating system, RealSense for vision.” It also comes with a preloaded software development kit from startup AirMap, which aids drone users to fly where it’s safe and legal. (AirMap is also partnered with drone makers DJI, 3D Robotics and Aeryon Labs.)

The Aero will be available for purchase by end of 2016, but Intel has not released a date or price. Intel is also an equity investor in drone tech startups, including Yuneec, Airware and PrecisionHawk.

Intel also introduced its Joule maker board, says TechCrunch, which Krzanich described as a platform to “create powerful computer vision products, and ‘seamlessly transition from prototype to at-scale robotics, machine vision’, drones and other products.” He adds that Joule offers “onboard computing, expansive memory, and human-like senses.”

Intel presented the example of Pivothead, which “built Joule into safety glasses, adding advanced computer vision capabilities that offer real-time feedback to factory workers as they go about their tasks.” With Joule, Pivothead was able to add volt verification via an audio notification so workers can go about their routine tasks and still “take immediate action” to correct any volt mismatches found using computer vision. Because image analysis and processing take place on Joule, no additional connectivity is required.

Since Krzanich came in as chief executive in May 2013, he has been pushing Intel’s technology into the Internet of Things, a reaction to dwindling sales of PCs, which has negatively impacted the company. Intel plans to “reduce its workforce by 12,000 by mid-2017,” and its second-quarter profit fell 51 percent, “reflecting $1.4 billion in charges related to the restructuring.”