Intel Looks to Eliminate PC Cables with its Skylake Platform

Intel believes that the wireless display and charging features of its next-generation Skylake platform will soon result in Intel reference designs that will eliminate all cables from personal computers. During Computex, the chipmaker detailed how docking, wireless power and connectivity will form the foundation of its post-Broadwell reference designs. Skylake is expected by the second half of next year, suggesting that devices based on Intel’s designs would hit the market as soon as 2016. 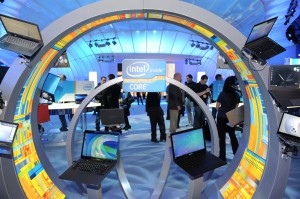 “The high-speed WiGig standard will be used as the short range ‘docking’ technology, instantly creating a connection to a screen and peripherals when a device is moved within range and then swapping back out to standalone usage by just picking up and walking away,” reports CNET. “WiGig delivers speeds of up to 7Gbps.”

“A truly wireless — and potentially tangle-free — PC has long been coveted, but the idea has been hampered by the practical need for connections with peripherals and the need for power. More recently, advances in areas such as wireless charging have made this more of a reality.”

Intel demonstrated magnetic resonance charging tech Rezence, which is capable of charging through 2-inches of wood, and can be installed under a table surface to charge multiple devices simultaneously.

Rezence is promoted by the Alliance 4 Wireless Power (A4WP). Members of the A4WP group include Asus, Dell, Fujitsu, Lenovo, Logitech, Panasonic and Toshiba.

“There are competing wireless charging technologies, and the rivalry has been fierce at times,” notes the article. “But with a recent agreement between A4WP and the Power Matters Alliance (PMA) to ensure cross-compatibility we’re getting closer to a comfort zone for widespread adoption of a stable standard.”