Intel is embracing the Internet of Things, making a big push into the smart products space, including wearables, tablets and cameras, showcasing at CES a host of new devices that will be branded Intel RealSense, many of which will leverage its new RealSense 3D camera tech. Intel CEO Brian Krzanich wowed the crowd when he sent a giant whale swimming over the head of the audience at his keynote address at the Venetian Hotel Monday night, a glasses-free 3D effect that looked amazingly lifelike.

“The average movie of ours today has half a billion files,” Katzenberg shared before previewing a clip from his studio’s upcoming “Mr. Peabody & Sherman.”

“To continue to raise the bar and continue to do things that are exceptional, technology is really our paintbrush,” he explained. 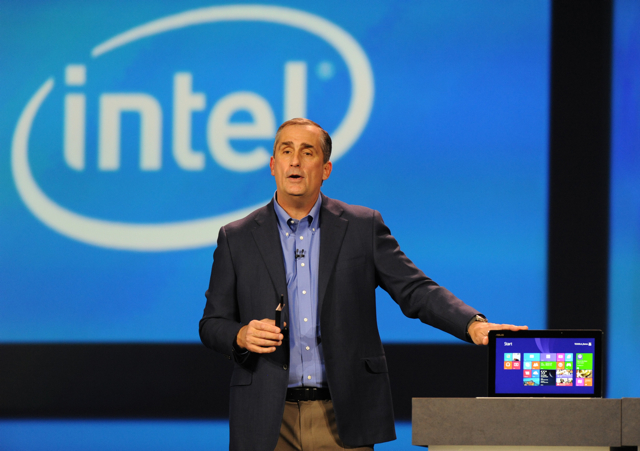 Consumer wearables included smart earbuds that monitor heart rate for sporting enthusiasts and a voice-driven headset dubbed Jarvis that allows you to drive your phone using voice commands (a la Siri). A convertible tablet PC with a built-in 3D scanner was impressive, and gaming tablets that allow users to integrate their own environment and objects into their games also took things into an interesting direction in terms of immersion, a theme to which Krzanich returned to throughout.

For the business user, Kzanich announced Intel will debut the industry’s first Android-Windows dual operating-system, for those who don’t want to choose, and that its security software, McAfee, would be offered free for mobile.

The RealSense 3D camera is described by Intel as “the world’s first integrated 3D depth and 2D camera module that helps devices ‘see’ depth much like the human eye.”

“The camera does full-color 1080p and has an on-board sensor for gesture and face detection,” reports Engadget, and “is set to be integrated into a number of diverse devices come the second half of this year, including tablets, Ultrabooks, laptops and all-in-ones, from top companies like Acer, ASUS, Dell, Fujitsu, HP, Lenovo and NEC.”