GoPro will launch its Hero4 line on October 5th with some notable new features. The $499 Hero4 Black, which the company claims doubles the performance power of its predecessor, supports cinema 4K video recording at 30 fps, 2.7K at 50 fps, and 1080p at 120 fps. Meanwhile, the $399 Hero4 Silver features a touchscreen display, 2.7K recording at 30 fps, 1080 recording at 60 fps, and 720p at 120 fps. Both models include 12-megapixel photo resolution, improved audio capture, Bluetooth, Wi-Fi and more.

“GoPro says the Wi-Fi connection is 50-percent faster than in the previous generation, and have better power management,” reports Digital Trends. “With the Black model, GoPro is touting the ability to capture 4K photos, in which an 8.3-megapixel photo can be extracted from a 4K video. It means users can capture both high-quality videos and photos without having to choose between the two.” 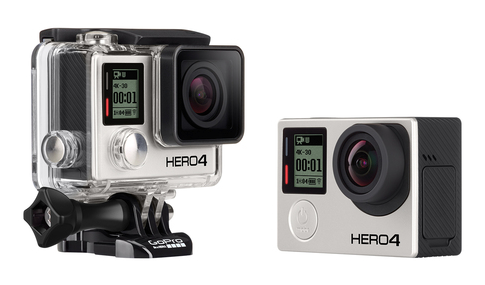 “Which brings us conveniently onto two other new modes called Night Lapse, and Night Photo. As the names suggest, these are aimed at getting better low-light stills/time lapses. Essentially, you can force a longer exposure for some trippy light effects.”

GoPro is also introducing a new basic $130 camera for hobbyists simply called the Hero. While it does not have wireless connectivity, it can capture Full HD video at 30 fps and 720p at 60 fps. The company is also keeping the $200 Hero3 White and $300 Hero3+ Silver in its lineup.

For more details and images, visit the GoPro site.