Google launched a pilot for Hands Free, a mobile wallet application that allows a buyer to use her phone for purchases without taking it out of her purse. The pilot, conducted in the southern San Francisco Bay area, is available in a few stores and designated McDonald’s and Papa John’s locations. The cashier’s system can detect the user’s phone; to close the transaction, the user asks to pay with Google and gives her initials to the cashier. The cashier can also detect if the user is the same person in the Google profile.

TechCrunch notes that this effort “to reduce friction” in the payment process is the same notion behind Android and Apple Pay. “For us, it’s less about competition with other companies,” said Google executive Pali Bhat. “In fact, we believe that the more that mobile payments is adopted by users, it’s good for everyone.” 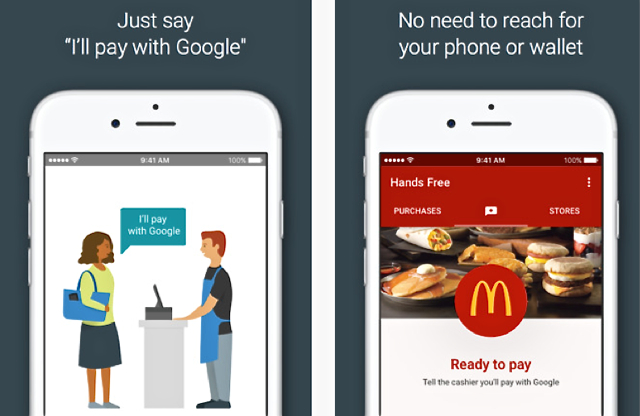 Android Pay is now accepted in 2 million locations in the U.S., says Google, which reports it is getting about 1.5 million new registrations each month. Hands Free will work with Android devices that date to Jelly Bean, the mobile operating system released in June 2012. TechCrunch also reports that Hands Free has similarities with Square, which “took a crack at creating a payments product that enabled users to pay cashiers without taking out their phone.”

Google still faces challenges with Hands Free: a chicken-and-egg scenario of getting retailers to install point-of-sale services and users to adopt it. Google offers a suite of APIs for retailers, but whether or not they decide to tap into it probably depends on whether Hands Free scales big enough to make sense to do so.

Still, Bhat says the goal for now is “not really scaling this.” “Our goal is to see how users are reacting and how merchants are experiencing this,” he said. “Once we’ve made all the fine-tuning that potentially we get from the feedback from merchants and consumers, we then are going to start scaling it. Until then our goal is not to have millions and millions of users adopt.”