Google is demonstrating an Android-powered touchscreen car console and infotainment system, offering Google Maps and Spotify as well as controlling seat positioning and temperature. For the first time, Google Assistant is integrated in the system, allowing users to ask for directions and make phone calls. The Android operating system will be demonstrated running on the Audi Q8 and Volvo V90 SUVs at this week’s Google I/O developers conference. Earlier this year, Google showed the software on a Chrysler vehicle.

Bloomberg quotes Android VP of engineering Patrick Brady that, “the system will make its way to Audi and Volvo’s entire fleets, along with other manufacturers.” According to Brady, in 2014, Google introduced Android Auto which lets people project content from Android smartphones to their car’s screen; Android Auto runs currently on 300 car models. With the new software, the driver doesn’t need to plug in an Android phone and can access 3D mapping and satellite images. 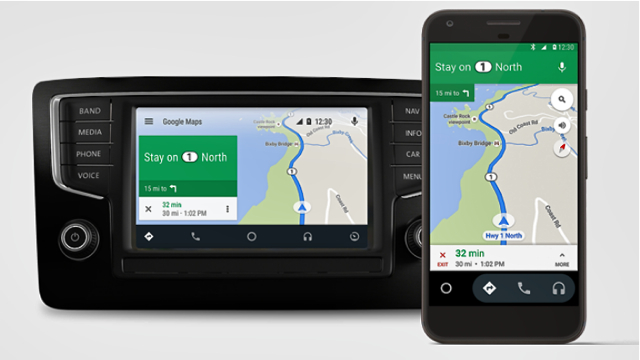 “Where cars are going, everything is integrated into one display,” he said. “We think the future is a much more seamless, integrated system.”

Based on a preview of the infotainment system examined by Bloomberg News, the system has three main windows: “a central panel for playing music, making calls and navigating; another with a grid of core car functions; and a third that lists installed Android apps.” The user activates Google Assistant by a button on the steering wheel and a voice command.

The software, says Bloomberg, “didn’t look completely finished” and “each Android software car partner will have the ability to customize the controls, interface, and applications pre-loaded into the operating system.” Google is not pre-installing its own apps, as it does with its phones, says Brady. YouTube, for example, is seen as a risk for distracting drivers.

The new car system “also hints at Google’s long-term ambitions to spread its artificial intelligence service to every corner of consumer’s lives.” Should a user have compatible smart home systems, for example, she could ask Google Assistant to “to turn on the lights at home before arriving.”

Other software companies that have launched vehicle software systems include BlackBerry’s QNX division, which has systems in more than 50 million cars on the road from Ford and Mercedes-Benz; Toyota, which has invested in its own features; and Apple, which offers CarPlay, similar to Android Auto.