Flix Premiere — “the world’s first online Cineplex” featuring international and indie films — has launched in the U.S., two months after its debut in the U.K. Available online and via iOS and Android apps, the streaming service offers exclusive “curated theatrical releases” for $4.99 per title (or five tickets for $19.99). The website describes the service as “the single point of discovery for the 95 percent of films that ‘never’ find their audience.” Flix Premiere plans to introduce 8-9 new films every 10-14 days that will be exclusive to the platform for 12 months.

This distinguishes the service “from traditional cinema release and VOD platforms like Netflix and Hulu,” suggests Variety. 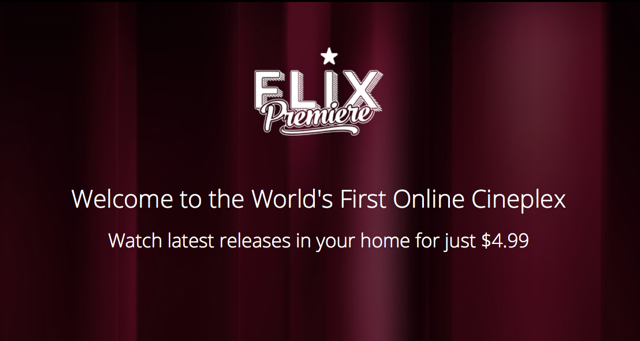 “We’re at the confluence of exhibition and distribution, if we do our job right,” said Martin Warner, founder and CEO of Flix Premiere. “Moviegoers will have a single, simple destination where they can discover great new and old movies, particularly in the independent sector.”

Warner founded the service to provide indies with a larger audience, since theatrical distribution centers largely on mainstream films and blockbusters. He predicts Flix Premiere will draw “more than 2 million viewers in its first year,” notes Variety, “compared with 600,000 for Netflix at the same stage.”

The service, which recently launched in the U.K and plans to roll out to seven more countries within the next year, currently features movies selected from festivals including Cannes, Sundance and Tribeca.

According to the press release, the site features trailers, “exclusive Red Carpet Premieres, advanced screenings of theatrical releases with access to behind-the-scenes footage, cast and production interviews.” Additionally, “the company is adding over-the-top content distribution on streaming media devices, including to game consoles, later this year.”