At last week’s D23 Expo in Anaheim, The Walt Disney Company unveiled the first look of a 3D model for its new “Star Wars” attraction, “Star Wars: Galaxy’s Edge,” which was first announced at the same Expo two years ago. The planned exhibitions, to be housed at Disney’s Hollywood Studios in Orlando and Disneyland in Anaheim, will cost $1 billion each and open in 2019. The exhibitions will be the most immersive the company has offered in a theme park, and will include a themed hotel, allowing guests to have a “Westworld”-like experience.

Bloomberg reports that the “Star Wars” attraction is just the latest of Disney’s “renewed investment surge in the parks,” following the opening of the $5.5 billion Shanghai Disney Resort, its first on the Chinese mainland; “Pandora — The World of Avatar” at Walt Disney World in Orlando; and a “Guardians of the Galaxy” makeover “of its Tower of Terror ride in California.” Also upcoming are “Toy Story” attractions in Orlando and Shanghai. 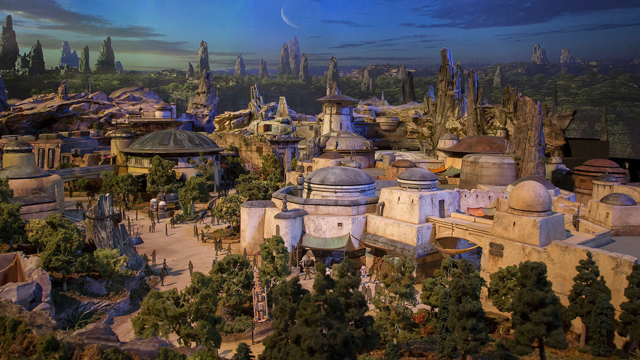 FBR Capital Markets analyst Barton Crockett estimates that the company’s “theme park division, the second-largest after television, is expected to account for the bulk of Disney’s profit growth through 2020.” Cable TV earnings, responsible for more than 40 percent of Disney’s 2016 profits, “are expected to be flat as that business copes with viewers shifting to online video options such as Netflix.”

According to The Verge, “basically, Disney wants to build a ‘Westworld’ for ‘Star Wars’ fans,” pointing to how Walt Disney Parks and Resorts chairman Bob Chapek described it. “We are working on our most experiential concept ever,” he said. “It combines a luxury resort with immersion in an authentic environment.” The hotel is “designed to look like a massive starship, with views of outer space from every window,” and will be a venue “where guests could have actual interactive experiences as part of a narrative storyline.”

“It will invite you to live your own dedicated, multi-day adventure in a galaxy far, far away,” said Chapek, noting that guests would “wear ‘Star Wars’ costumes” and that hotel employees would be costumed as “’Star Wars’ creatures and droids.”

“The goal of immersive entertainment is to bring people into fictional worlds and situations; to give them agency and presence in a way that blurs the line between fiction and reality,” notes The Verge. “Disney is all-in on the concept of immersive entertainment, no matter the medium.” Chapek also revealed that, “Hotel New York at Disneyland Paris will be getting a superhero makeover and turned into Hotel New York — The Art of Marvel.”