“Content without strategy is a home movie,” said David Tochterman, head of digital media for Innovative Artists, a bi-coastal talent agency. “And all of us on this panel are investing our time not just in good content, but the strategy to make it successful.” The panel he was referring to was a Digital Hollywood focus on how today’s multitude of media platforms has significantly changed the content game — from development and production to marketing and distribution. 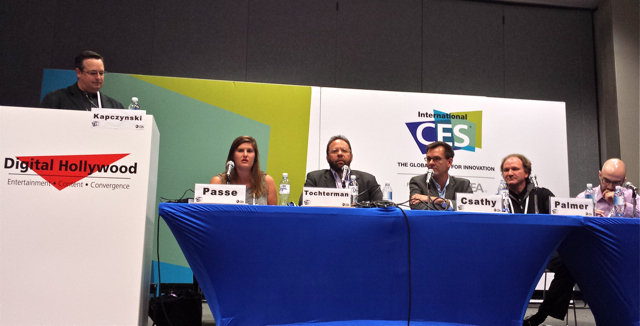 Changing technology has democratized production, said panelists, enabling more and more people to create content. “There’s so much more opportunity than ever before,” said Tochterman. “The digital platform has emerged over the past five years which means there are more people to sell to, more people to say yes, and more ways to get something made.”

The flip side of that, pointed out Katleman, is that the talent is making a lot less money. “If it’s a cool new dramatic show, it’ll be extremely low budget and a lot of the performers, writers and producers see that as a double-edged sword,” he said. “They’re being paid so much less.”

Netflix, Amazon, YouTube, Xbox and DirecTV were all identified as models of the new digital studio. But although the platform is digital, the business model follows the arc of premium cable. Both started off aggregating content and now, like premium cable, are moving into original production.

“‘House of Cards’ or ‘Orange Is the New Black’ are being produced on budgets wildly in excess of what a traditional TV show would cost,” said Katleman. “The new original programming is tentpole programming to build audience, similar to how, back in the day, HBO spent a lot of money on boxing to draw in audience.”

Passe is anxious to see digital content that exploits the medium. “This is a really cool interactive media and people are consuming media in new and interesting ways,” she said. “My goal is to come up with what these new products are going to be to take advantage of that.”

In the meantime, the end game for a Netflix or Amazon’s original content is to draw viewers into their ecosystems. “Netflix needs to constantly prime the pump in terms of subscription,” said Csathy. “In terms of other newer entrants, like an Amazon, it’s loss-leader thinking — you’re bringing people into the world of Amazon and making money that way.”

Whereas a traditional TV pitch only required a good idea, digital content creators without the budgets or ecosystems of the big players have to develop a winning business plan as well. “You have to have the business model on the table when you’re pitching to digital,” said Tochterman. “Now, my business is more about hit businesses, not hit shows.”