Panasonic demonstrated its interest in 4K through the CES unveiling of a prototype 56-inch 4K OLED display and 20-inch 4K tablet. It is also focusing on production, previewing a proof of concept 4K x 2K camcorder that is aimed at prosumer applications as well as broadcast. The camera will offer a frame rate of 30 fps, but very little additional information was provided. 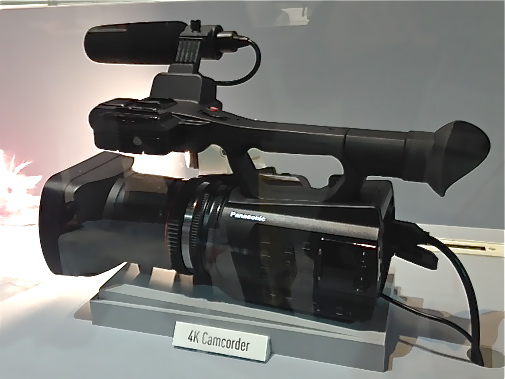 A Panasonic spokesperson said pricing is expected to fill the “price gap between the entry point of HD and Ultra HD.”

UPDATE: Sony is also showing a concept 4K camcorder (CNET has a 2-minute video). “We want to bring consumer 4K hi-def to the masses,” said Amy Koppmann of Sony.

The Sony concept is roughly the same size as the Panasonic camera. When asked if the form factor might come down in size, Koppmann was cautious: “I’d like to say if we’re back here in five years… I’d love to show you a full lineup of 4K pocket camcorders, but the first one you’ll see is probably going to be a more robust [sized camera].”