Broadband Adoption and How it Relates to Smartphone Usage

According to a new report from the Pew Research Center’s Internet & American Life Project, 70 percent of Americans 18 and older have high-speed broadband connections in their homes. Results of the survey, released yesterday, indicate that 20 percent of adults in the U.S. are still without broadband or smartphones for Internet access, while 3 percent are still using dial-up connections. Broadband adoption — still influenced by age, education, income, location and race — may also now be impacted by mobile substitution. 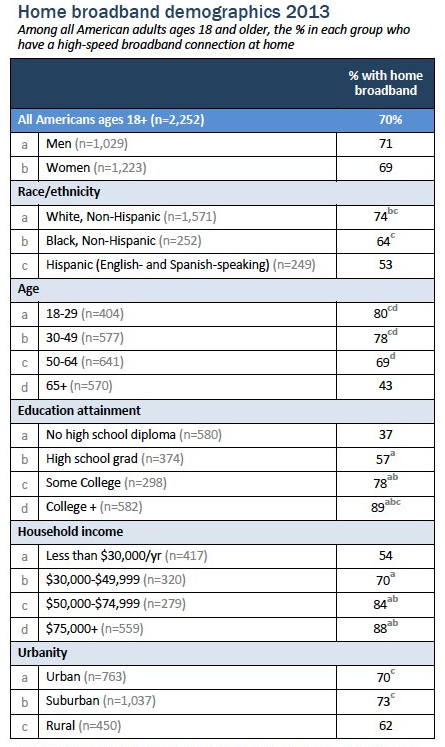 “We’ve consistently found that age, education, and household income are among the strongest factors associated with home broadband adoption,” said Kathryn Zickuhr, research associate for the Pew Research Center’s Internet Project and lead author of the report. “Many dial-up users cite cost and access as the main reasons they don’t have broadband, but for adults who don’t use the Internet at all, a lack of interest is often the main issue.”

“It’s not clear from Pew’s numbers how many of that 30 percent without broadband may opt to use the Internet at work instead: a lack of interest for paying at home could be because they can use it at work already,” reports TechCrunch. “But, what Pew has found is that there is some evidence of mobile substitution: with some 56 percent of U.S. adults now owning smartphones, 10 percent of respondents noted that they use these instead of broadband+computers.”

While this is a lower percentage than what is currently emerging in developing nations, it could be a sign of things to come in the U.S. as phones improve and mobile networks become faster and less expensive.

“Lee Rainie, the director of Pew’s Internet and American Life project, says this is the first time that Pew has measured broadband usage and how it relates to smartphone ownership and usage, so it’s difficult to make a historic comparison,” TechCrunch explains. “Pew notes, though, that the 70 percent figure is not because of access issues: some 98 percent of the population lives in Internet broadband coverage areas, according to the Census Bureau’s July 2011 Current Population Survey.”