San Francisco’s BitTorrent is leveraging its expertise in online file sharing tech to develop Bleep, an encrypted snoop-proof chat app. None of the texts or calls are stored, and only the two computers are involved in the communication. While the NSA could potentially monitor the interactions, the job becomes much more difficult with the new app. Not only does Bleep encrypt its traffic and encourage users to keep their identities secret, but it also uses no central server.

“We never see your messages or metadata,” wrote Jaehee Lee, senior product manager for Bleep, on the BitTorrent Blog. “As far as we’re concerned, anything you say is ‘bleep’ to us.” 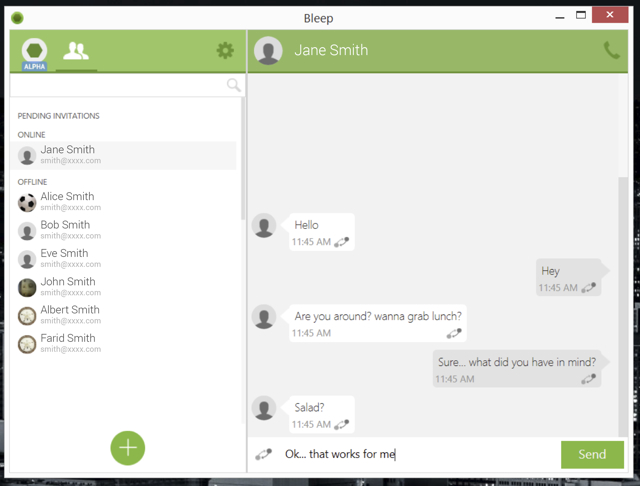 Bleep differs from other services that focus on scrambling the communication to ensure privacy, which still requires a central server (the metadata passing through the central server can still be intercepted).

“We are not even storing data temporarily on servers and then deleting it,” explains head of the Bleep project, Farid Fadaie. “We never have the metadata in the first place.”

“Instead, when User X tries to start a call or send a text to User Y, X’s Bleep software asks other BitTorrent users if they know Y’s IP address,” reports the Los Angeles Times. “Their query eventually reaches a computer that Y’s Bleep software has made contact with, revealing Y’s address. The information is sent back to X, enabling X and Y to connect directly.”

If Congress decides to change the 1994 Communications Assistance for Law Enforcement Act to include data communication rather than just phone network wire tapping, BitTorrent may have to adjust the app or withdraw it from the U.S.

For now, Bleep is Pre-Alpha — only available by invition to users with Windows 7 or 8. Audience and platform expansion is expected to come in the next few months.