Auto manufacturers are paying special attention to their vehicles’ technology interfaces, from touchscreens in the dashboard to smartphone apps. App developers are also focusing on cars, using voice recognition to offer music streaming and hands-off text messaging. Not all is smooth sailing, however. Government regulators are concerned that technology might become a distraction, and thieves are learning to hack systems to steal cars. Consumer complaints about in-car technology can also hurt a vehicle’s quality ratings.

The Wall Street Journal reports that research firm J.D. Power & Associates showed “a jump in consumer complaints about clunky voice-recognition systems and infotainment systems that aren’t intuitive and easy to use.” Despite the pitfalls, auto manufacturers are eager to incorporate new technologies, and WSJ names “seven innovations that are available on some vehicles today, or will be in the near future.” 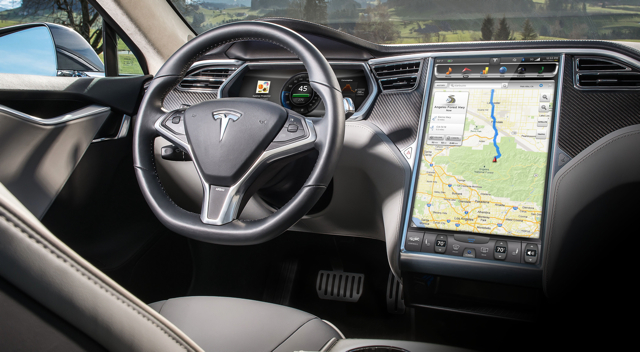 First are “touchscreens you don’t need to touch.” The trend of “phasing out radio buttons and knobs for touchscreens” is now evolving into gesture-control technology to interact with the radio. A system from Delphi Automotive lets a driver twirl her finger clockwise to raise the volume. The system resides in BMW’s AG7 series luxury sedan and other luxury models.

German company Robert Bosch developed “valet parking by phone,” which lets the driver park his car via smartphone, “from even a few hundred feet away from the vehicle.” The software requires the driver to park in the specific spot once to program it, and is able to park in narrow spaces. Other manufacturers are also developing automatic parking — which should become a feature in two to three years — as part of the path towards autonomous vehicles.

Also improving is new technology to prevent drowsy drivers. These systems have made an appearance on Mercedes and other luxury cars, and Ford, Nissan, Subaru and others also offer driver-alert systems. The new ones “use cameras to monitor the driver’s face for signs of fatigue.” Next year, GM will introduce its eye-tracking system in a Cadillac.

Tesla offers “over the air” updates to the car’s autopilot system. Now, more automakers will soon offer this “over the air” update capability for some infotainment features. Using the smartphone as a virtual car key, via Bluetooth low energy, has been demonstrated by German auto supplier Continental. Ford and General Motors already have smartphone apps to remotely unlock and start their cars.

An app from AutoNet Mobile in California gives drivers an alert to problems such as low tire or oil pressure and “automatically loops in the owner’s dealership and can help schedule service appointments when needed.” GM’s OnStar system, on some models, monitors the vehicle’s starter motor, fuel pump and 12-volt battery, “sending an alert at any sign of trouble.”

A high-tech rearview mirror from Gentex Corporation provides a camera mounted on the rear of the vehicle, that essentially doubles “the driver’s rear field of vision” and eliminates “the obstructed view from the vehicle’s pillars and back-seat headrests.” This system can be found in the Cadillac CT6 luxury sedan.