Google Glass moved Augmented Reality from the science fiction depicted in “Minority Report” to the real world. But the technology — which allows the superimposition of data, 3D CGI or video over a real environment, in real time — still has a long way to go. More importantly, the work has barely begun to make AR a revenue-generating business. “We’re not just putting content on top of the world but using context to decide what to display and how to display it, to expand the story and the experience,” said DAQRI CEO Brian Mullins.

“It’s one thing to show where Starbucks is, but more interesting if the device knows it’s a chair and Buzz Lightyear can sit in that chair and tell you a story,” he noted during a CES panel. “That’s how we shape the story itself.”

In these early days, several obstacles prevent AR from becoming mainstream. One is the form factor. 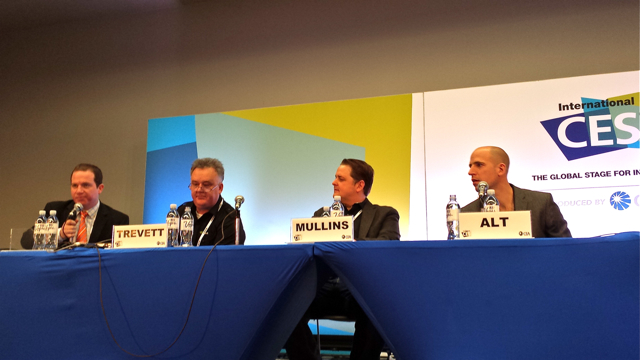 “When AR emerged, head-mounted displays were the killer wear,” said Dr. Thomas Alt, CEO of Metaio. “The optical design of Google Glass is very similar to the displays of the late 1990s.” Most people use AR via their smartphones, said Alt. “The future will not just be Google Glass, but smartphones with a camera that you can point,” he said.

The lack of sufficient battery life is an obstacle consistent across nearly every CE product category, and AR is no exception.

“Power performance will be a critical issue to face,” said Neil Trevett, VP Mobile Ecosystem at NVIDIA. He reported that NVIDIA has unveiled “next gen mobile processors” to bring desktop GPUs into mobile devices. “We’re working to build the AR ecosystem to bring together hardware and software,” he added.

Problems with reliability and the lack of proper lighting for the superimposed 3D imagery will also eventually be resolved by a combination of new hardware and software.

Creating relevant, entertaining content and finding the best ways for users to interact with it are the true “killer apps” for AR, and neither of those issues have been seriously addressed yet. “AR needs a new user interface,” said Alt.

Mullins agreed. “When you have a new medium, interacting with that medium requires new ways,” he said. “We have a lot to learn about how people use this technology.”

The same goes for content; the lack thereof has been part of the conversation around Google Glass. Mullins identified what he thinks it will take to make AR content work. “If the right people make the content, you’ll have a good user experience,” he said. “Start where you would with any medium: know your users and tell them a story. That’s how to be successful.”

By that, he means that when artists and other creatives can displace engineers and computer programmers as content creators, AR will truly begin to blossom, as a storytelling medium, hastening its entry into the mainstream.