At Computex 2018, Asus announced its ROG (Republic of Gamers) Phone, with gamer-oriented design and a 90Hz display, which means the screen refreshes 90 times per second for smoother animation. The ROG Phone will compete with the Razer Phone, another mobile device prized by gamers. Asus ups the ante by adding a “specially selected 2.96GHz Qualcomm Snapdragon 845 chip” to each ROG Phone, ensuring it will be the speediest one around. The phone also offers vapor cooling and a special attachable fan accessory.

The reviewer at The Verge says that although the actual hardware is impressive, “the premise of an Android smartphone for hardcore gamers still feels like it’s off the mark,” since “Android doesn’t have any games demanding enough to tax” the processing provided by the Snapdragon 845, and certainly not the vapor cooling and fan accessory. 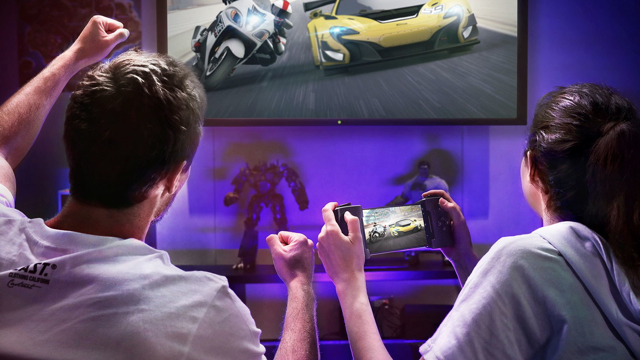 Instead, he dubs the ROG Phone “a bizarre transplantation of the traditional PC gamer’s aesthetic and performance priorities into the mobile realm,” although he admits he is “deeply intrigued by its design, customizations, and deluge of gaming-centric attachments.”

This phone stands apart from others not just with the fastest Snapdragon but “more than 8GB of RAM” and because only the Huawei P20 Pro Porsche Design also has a 512GB storage option. The user squeezes the ROG Phone to “activate maximum performance.” Upon squeezing, the phone’s sides give off a red glow and the UI skin transforms from blue to deep red. This so-called X Mode “automatically optimizes performance for gaming by shutting down background processes and prioritizing whatever you’re playing for both RAM allocation and data transfer precedence.”

Asus also other accessories: a Gamevice controller “with two analog sticks, two sets of shoulder buttons and some gaming keys,” which “works in tandem with a WiGig Dock to wirelessly stream — using 60GHz 802.11ad Wi-Fi — your game to a connected nearby TV.”

TwinView Dock is a clamshell accessory that turns the ROG Phone into a dual-screen device, although the 6,000mAh internal battery makes it “huge and chunky.” TwinView Dock “has a matching 6-inch, 1080p screen, just like the ROG Phone, and it adds shoulder buttons, enhanced force feedback, a front-facing quad-speaker system, and extra cooling,” for use with marathon gaming sessions.