Amazon Draws Distinction Between its Tablets and E-Readers

Amazon recently announced the expansion of its tablet line and e-reader offerings. As part of an effort to strengthen ties between its tablets and other new hardware, Amazon has dropped the name “Kindle” from its tablets. Formerly called Kindle Fire tablets, the simply named Fire HD and Fire HDX will be more closely aligned with the company’s Fire TV and Fire Phone. The rebranding highlights the distinction Amazon hopes to make between the Kindle e-readers and more advanced Fire tablets.

The rebranding “further ties the tablet family to Amazon’s Fire line of devices, which now includes the Fire TV and the Fire Phone,” reports CNET. “It’s a bit of a head-scratcher considering that these devices are not as well-known as Amazon’s e-readers. Still, it could serve as a window into what Amazon has in store for its devices in the future.” 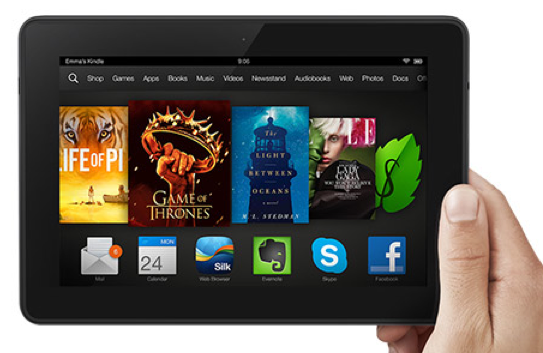 While Amazon’s e-commerce site has historically focused on physical and digital products (for example: books and e-books, CDs and digital music), hardware is necessary to keep customers connected with access to purchasing.

A major part of the company’s strategy is to develop its own hardware and ecosystem that will make purchasing seamless for its current customers, while hopefully also attracting new consumers.

“Amazon’s recent product announcement is indicative of its strategy to push smarter devices,” suggests CNET. “It launched a single new e-reader, the Kindle Voyage, while also unveiling a refresh of its Fire HDX 8.9 and Fire HD 7 tablets, as well as a colorful $99 Fire HD 6 tablet. Further betting on the family-friendly nature of tablets, Amazon will also make the Fire HD 7 and 6 available in Kids Editions, which include a chunky case, a 2-year warranty, and a free year of Amazon FreeTime Unlimited, a subscription service focused on kid-friendly content such as apps, games and videos.”

Fire TV is currently second in popularity to Google’s Chromecast on Amazon’s electronics site, but the company has failed to gain traction with its Fire Phone. Its tablets had some initial success, but has not been able to compete in the long term with Apple’s popular iPad and the inexpensive tablets running Android.

“Branding expert Rob Frankel said the company was probably hoping to help buoy the Fire Phone with the tablet’s reputation and disassociate the device from the e-reader,” explains CNET. “Consumers most likely thought the Kindle only referred to the e-reader and not the tablet. While Frankel can understand why Amazon would make a move like this, he said it’s a mistake to attach the tablet to the Fire Phone, given its tepid reception.”