The Sense 3D scanner is now available, with a $400 price tag and scanning abilities for objects up to 10 x 10 feet. The handheld device can even digitize a person, and within the next few years, it is expected to become a mainstream consumer product. Sense reviewers are enthusiastic about the scanner, praising its attention to detail and ease of use, although there is a minor learning curve and some have questioned the need for a USB cord. 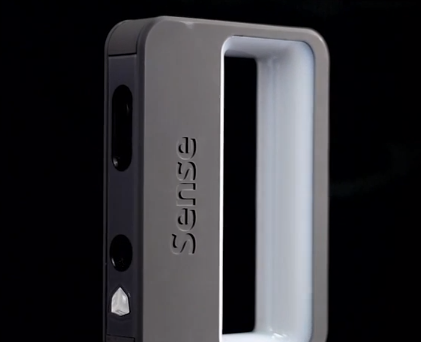 “I’m not completely sure what I plan on doing with all these scans, but while such questions are entirely logical, they’ve yet to curb my enthusiasm for the device,” writes Engadget reviewer Brian Heater. He says it seems “too good to be true,” noting how user-friendly, relatively portable, and inexpensive the scanner is.

“The Sense is a consumer-facing offspring of the hand-held industrial 3D scanners like the ones a team of Smithsonian archivists is using to digitize a small portion of the museum’s collection,” Heater writes. “As with those devices, the objective here is to essentially ‘paint’ your subject, moving your hands to make sure the Sense’s cameras have picked up all the information they need to form a full picture of the object.”

Heater says the software gives users a good indication of the object they’re scanning as they go along, “whiting out all of the areas the camera isn’t picking up” so they can go back to capture that detail. One downside is that the device is tethered to a USB cord, which can make the scanning process cumbersome. Currently, Sense doesn’t have Mac compatibility, but that will come in January.

One of the best things about Sense is its ease of use. Heater calls the scan set-up “dead-simple” and the scanning experience “straightforward.” He says there’s a learning curve, and that many of Engadget’s initial attempts were “choppy or incomplete,” but that he “felt like an expert head scanner quickly enough.”

When the masses are ready to embrace a product like Sense, Heater says, “they’ve got some extremely cool technology waiting for them.”