Researchers at the University of North Carolina and North Carolina State University have developed a new, faster 3D printing technique — and now a California company is planning to use the technique to revolutionize production. The technique is called CLIP, or Continuous Liquid Interface Production. Unlike traditional 3D printers, which construct prototypes layer-by-layer, CLIP 3D printers build an object in its entirety out of liquid resin. The process is reportedly up to 100 times faster than other methods.

The technique is faster because it takes the repetition out of constructing an object layer-by-layer. CLIP works by shining an ultraviolet light beneath a pool of liquid resin to create the silhouette of the object. Then the finished silhouette is transferred through a window and a mechanical hand pulls up more liquid to build the rest of the object, according to The Atlantic. 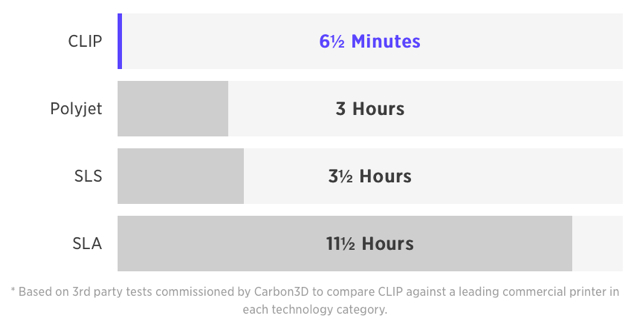 Carbon3D plans to bring the CLIP tech to market. The startup plans to demo the technique at the TED conference in Vancouver. Carbon3D co-founder and CEO Joseph DeSimone believes the tech will revolutionize manufacturing. Currently, the startup’s 3D printers create objects up to 3 inches by 4 inches by 12 inches.

An automotive company, an athletic apparel company, a design studio, and an academic research lab are already experimenting with Carbon3D printers.

In the future, the startup plans to make printers that can create both larger and smaller objects. DeSimone told Re/code that he imagines the first commercial use will be digital dentistry to make molds of teeth in only six minutes. He also believes that the company can speed the machine up even more by adding cooling mechanisms. Future printers will also use a wider range of materials, so that printed objects will be more sturdy.